Read more…
Hi everyone,My name's Valentina Moza. I'm a self-produced musician who writes original music. I do the programming/composition/arrangement/lyrics and vocals for professional, high quality and inspirational Gospel/Christian/Dance/Electronic music.To preview and purchase my upbeat and inspirational gospel music visit:http://www.godzangelmusic.com/gospelmusic.htmlhttps://itunes.apple.com/us/album/light-of-the-world-single/id848289547View my biography at:http://www.godzangelmusic.com/valentinabiography.htmlI promote the true gospel and I have lots of free, educational, informative, inspirational and motivational material on my websites in the form of: tracts, jigsaw puzzles, posters, greeting cards, wallpapers, and much more at:http://www.godzangelmusic.comhttp://www.valentinabestmusic.netPlease recommend this material to all your friends!http://www.valentinabestmusic.net/free-greeting-ecards.htmlhttp://www.valentinabestmusic.net/recommend-website.htmlGod bless you all!
Read more… 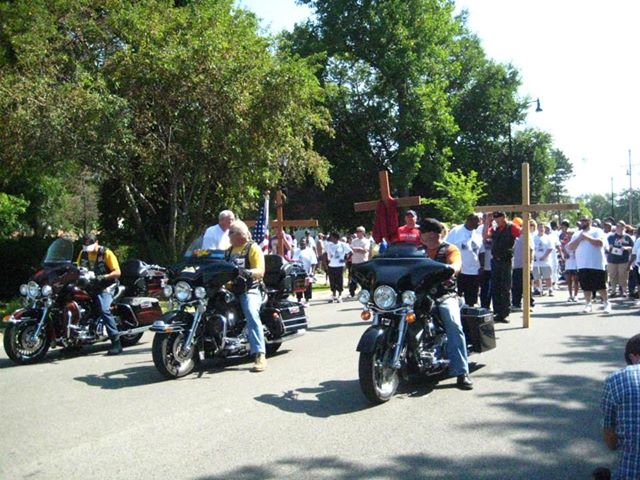 When we were first approached by a young Christian mom with a vision in early April with the possibility of bringing the national prayer movement - God Belongs in My City (GBIMC), we were rightly inspired and gung-ho about the opportunity to participate in a growing national/worldwide movement which had its roots in a New York City subway! GBIMC sprung from the hearts of a youth group who happened to see a poster in the NYC subway system from 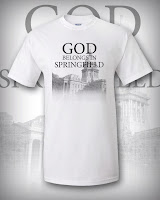 American Atheists which said “A Million New Yorkers Are Good without God. Are You?" They went back and reported this to their senior church leadership and were so moved that an idea was birthed. This was in October 2009. One month later, youth from all five NYC boroughs began what is now the God Belongs in My City prayer walk through Manhattan. It has since spread like wildfire to Canada, Switzerland, Africa, Puerto Rico and last year over 30 cities in America alone!

Last Saturday August 24, GBIMC came to the capitol city of Illinois - Springfield and had a solid impact on the Spiritual life of this wheeling-dealing political and business oriented city of 115,000! It was not easy getting this through a closed and tightly religious system where every major church and denomination holds on firmly to its territory...all except one - Calvary Temple Christian Center. Senior Pastor there Mark Johnson caught the vision and empowered his outreach pastorStacy Barnett and contacted me and together with Ezella Millswho brought the idea in from New York, we set forth on a course which really made this take off. 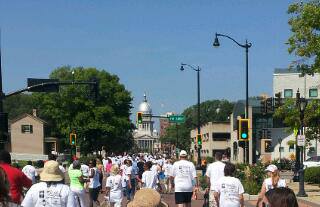 This was solidified after the National Day of Prayer in May, which I hosted for the eighth year in a row and we were joined by former Channel 20 Morning TV host Jessica McGee who now works as the Marketing Director for the wonderful Staab Family. She represented them magnificently and our final planning meetings were attended by PJ Staab himself, without whom we would not have had the major business involvement necessary to underwrite the upfront costs and police permits and street closure permits necessary to make this happen in the natural. PJ is a super joy to work with. He is well loved by the regions military veterans for his involvement in a huge memorial outside the city of New Berlin as well as his sense of humor.

Through all of this, we were covered in some major prayer, as there was one obstacle after another or one spiritual attack after another. We had tireless and faithful leadership from Stacy Barnett and her church support - not just from the pastoral offices and administration, but from the core of Calvary Temple. They believed in this. We have many people to thank and they will be mentioned in no particular order at the end of this post.

The Day of the Prayer Walk, which we called GOD BELONGS IN SPRINGFIELD and had hundreds and hundreds of t-shirts made up at cost by Edgar Williams of Ambitious Designs. We met at the Comer Cox Park at the corner of 18th Street and Capitol for the 1 1/2 mile walk down Capitol Avenue to the State Capitol Steps. The love and camaderie and Christian fellowship across deep racial lines was a beautiful thing to behold. Even though almost every church officially turned down this movement to re-establish Jesus as the LORD of this City, many of their members turned out anyway!

One thing I will not forget is our tireless leader Stacy working so hard to get 1500 bottles of water iced down and ready for the anticipated crowd at the end of the walk; the volunteers there; the worship band already praying on the ground of the End of Walk service. My fond memories is the excitement of all different Christians in the same event T shirt all ready to work for Jesus. Stacy and I edited some ten or so prayer points which I read out all over the part to different groups of people with my bullhorn. The awesome sight of the Christian Motorcyclists Association led by brother Nick Courtney and the three Crosses behind them as almost 1000 people of all ages and backgrounds took off in a brisk walk down Capitol, was a sight to behold.

The subsequent hour long service on the Capitol Steps by the Lincoln Statue was so powerfully moving that worship, constant worship was breaking out all over the place!! PastorJerry Doss of Abundant Faith Christian Center, assisted by his magnificent choir set the mood for Prayer and the Word as they led off they service. I was next with the spirit-led Praise-Repent-Yield call to the Assembly. We went through 7 minutes of that and they pressed in!!! We were followed by the Bishop of Springfield - Thomas Paprockion Religious Liberty after he was introduced by PJ and then some powerful praying by our State Senator Sam McCann. The powerful and timely message by Pastor Mark Johnson topped off an amazing and life altering (for this city) day.  The clarion call Pastor Mark proclaimed was to stand together, united, under the Banner of Jesus, or fall. This is the underlying theme of GBIMC - not unity at any cost where we toss aside the Basics of the Christian Faith, but unity in the Essentials to get right with God, through Repentance and then lead others to Jesus. This is the only way we can make any kind of difference and thus, show the world that God really DOES belong in our city!

Thank you to Springfield First Baptist led by Pastor Mike Henderson, for being the only other church, apart from Calvary Temple and Abundant Faith, to step up and support us from early. Over 30% of their church walked with us. Thank you to Todd Green and the Green Family Stores for underwriting the costs from the City of Springfield. Thank you to PJP Autos, The Staab Family and so many more who gave selflessly to this cause. Finally thank you - and in no small measure, to our wonderful MC - Calvary Temple Outreach Pastor Stacy Barnett! We are already planning next year's event and learned several things we can improve from this our first endeavor. Our primary purpose, my friends - to Lift up the Name of Jesus and proclaim Him as King over Springfield! Mission? ACCOMPLISHED! 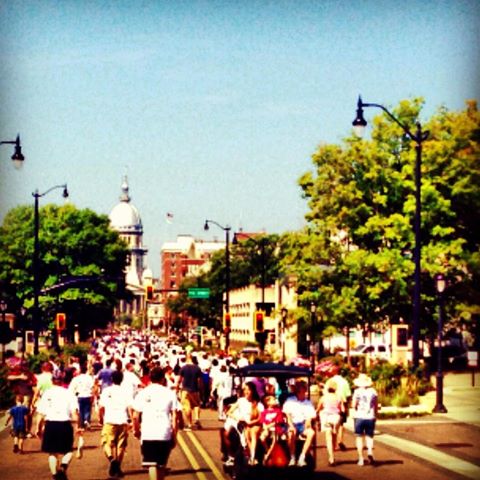 Read more…
Watch LIVE Streaming, nationwide TV video interview with Terry & Barbi Franklin from Opryland Hotel on Friday, Sept 30th, 12noon CT on "AFA Today". They are introducing the www.AwakenUS.com story to their first media venue. Unite with millions across our land for this prayer effort Nov 21 - Dec 31, 2011! Click this link to watch at AFR for Live Streaming Video online
Read more…
See www.AwakenUS.com to learn about nation-wide fasting & prayer event!  We're calling prayer warriors and churches all across America to unite in prayer for a Spiritual Awakening in our land Nov 21 - Dec 31, 2011. Thousands have already joined the effort nationwide. Millions will be hearing about this united season of prayer over the next month. Please spread the news!

Today, especially in the wake of the events of Jan 6 in our nation’s capital and the aftermath, there have been many thoughtful things written about the dangers of Christian nationalism.  One writer said: “The split we are seeing is not theological or philosophical. It’s a division between those who have become detached from reality and those who, however right wing, are still in the real world.”  I disagree.  I believe that the problem is theological, and the healing can only happen when we deal with the underlying spiritual issues at work here.  Bad theology (another name for heresy) blinds us to the underlying spiritual truths.

I want to begin with the 18th century: Specifically the revivals and evangelistic campaigns of Finney and Moody.  The pattern at that time was revival of the church then evangelism of the community.  Revival was not about changing the culture or the community; it was about changing the heart of the church.  The life-transforming work of the Holy Spirit can be stifled by unconfessed sin which hardens the heart.  The challenge of unconfessed sin is that it is often deeply hidden in our hearts – or to use modern language, it rests within our subconscious.  It is something repressed so that we, perhaps, have a vague sense of something wrong, but in our everyday life it cannot be fully grasped or acknowledged.  The revival of the church happens when we individually and corporately search the depth of our souls.  It comes with the deep conviction that we are sinners in need of grace. That humility at the feet of the Cross gives us the power to break through the normal human defenses that hid our own sin from our self.  It is with the spiritual renewal that comes from revival that the church is then empowered to witness the Gospel of Christ to the surrounding community.  The power of the gospel comes out of human brokenness – a brokenness that has experienced the power of grace.

The theological error of Christian nationalism is that it reverses the process and confuses revival with evangelism.  The narrative of Christian nationalism is that the nation needs a revival and that revival can only happen when more people become Christians.  The sin-focus is not on unconfessed sin within the church, but on the moral failings in the society.  The believer comes not broken but empowered, having the answer to society’s problems and using power to bring about moral reform.  This error is especially dangerous because it blinds us to our own failings.  We never get to the place of soul searching and confession of sin.  It replaces the truth of our own brokenness with the lie that Christians are powerful.  It then closes off the most important truth of the gospel: our own need for grace.  Thus falsely empowered, we use our sin-warped power – in the name of Jesus – in inflict more damage.  In this way, Christian nationalism transforms itself into a political ideology and becomes the enemy of true evangelism.