While there are many individual beliefs and actions that create a successful communitywide initiative like the Sleep Out Campaign, at the core is a central unifying vision to help families in need. The involvement of churches in Plymouth and Wayzata in this initiative is an outward sign of belief in and application of the good news of the gospel in the context of these communities. When people unify around serving families in need they are coming together around what they care about. While this may reflect a transcendent belief such as the golden rule, “Love your neighbor as yourself,” it is not primarily a theological unity that is sought, but a humanitarian one. This is also known as centered set thinking.

Centered set thinking was first introduced through Dr. Paul Hiebert of Fuller Theological Seminary and popularized by Sam Williams and Eric Swanson. It’s at the core of my writing in my book, The Good City.

In a nutshell, this concept advocates that Christians go beyond simply partnering around theological beliefs (as people do when becoming members of a church) and join others around those people, values, and things we care about (see diagram below). 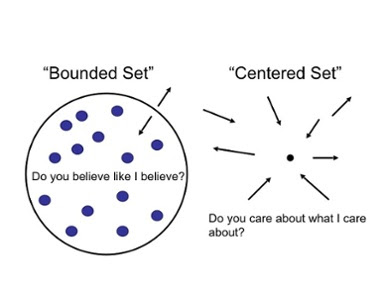 Centered set thinking opens the door to all kinds of unlikely partnerships around nearly every issue that matters in cities and communities. As a coach, I work with community groups in cities working on issues of foster care, jobs, sex trafficking, alcohol and chemical abuse, education, hunger, housing, and more. When we partner with others who care about the same issues, it opens the door for myriad conversations that might not otherwise happen. This approach invites people to become engaged in a good cause that will transform lives and create good cities

SCROLL . . . for another Guest-Post on Centered-Set Thinking