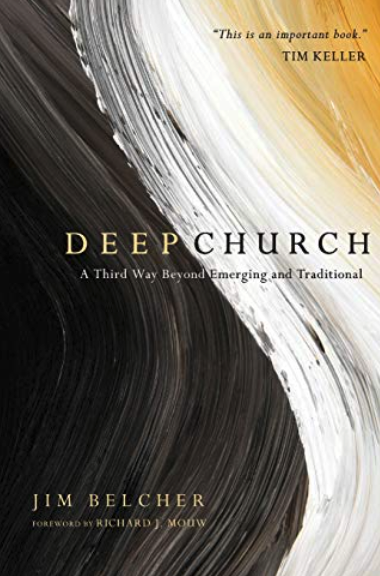 Phil ~ Seismic cultural changes have traditional churches running for cover. How serious a threat are those changes to the future of evangelicalism?

Jim~ Huge question. I would need pages to answer this well. And even then I am not sure I could answer it well. I would agree that the changes have the traditional church running for cover. How serious a threat are they to the future of evangelicalism? Plenty serious if the traditional church does not recognize them and learn to respond to them in a way that is biblical and faithfully contextual to the new environment we all find ourselves in.


Phil ~ Is the Emergent movement a renewal from within evangelicalism or a new movement altogether? Is it a threat to the Church?

Jim ~ In the book I describe the emerging church as a broad movement, most often found in the evangelical church, though some are in the mainline church. The Emergent Village is park of this movement but not the sum total of the movement. Most of those who are called “emergent” are found in the Emergent Village group. Ed Stetzer calls them the “revisionist” group within the larger emerging movement. They are the ones that get the most pushback from the traditional church because they are the ones most open to rethinking/challenging historic evangelical doctrines like penal atonement, original sin, the doctrine of hell, etc. This group includes thinkers like Tony Jones, Doug Pagitt, Brian McLaren and John Franke, to name just a few. To answer your specific question about whether it is a renewal movement or a new movement, I would say that if you are speaking of the emerging movement I would say it is mostly a renewal movement. But if you are just speaking of the revisionist side of the emerging camp I might be tempted to say that it is a new movement, at least with some of them like Doug Pagitt. I think he might say the same thing as well. But I am not sure.

Phil ~ A few decades ago, GM (General Motors) and IBM (International Business Machines) could do no wrong; today one company was bailed out of bankruptcy and the other no longer makes machines but is still in the Fortune 100. What are the blind spots in the traditional church and what are the implications of not adopting new ways of being Christian or expressing Christianity?

Jim ~ Another good question. I think the danger of the traditional church is multi-faceted. On the one hand, there is the danger of tribalism where the traditional church is so critical of the corruptions in the culture that it just circles the wagons and wants nothing to do with culture. This is what Os Guinness has called dualism or Blamires called the loss of the Christian mind. We separate reality into spiritual and secular. So while the church may focus on developing people’s “spiritual”side they neglect the full Christian mind which thinks Christianly about every area of life—including business, economics, politics, education, and all aspects of culture. So Christians live dualistically, their faith has very little to do with how they act at the job or in their vocations. But on the other hand, the traditional church can fall prey at the same time to acting like the chaplain of the culture, blending into the culture in order to be accepted. We become squeezed into the mold of the world, not able to offer a prophetic critique of the fallen structures of the world. What the traditional church needs is to rediscover the Christian mind, which will allow it to be salt and light at the same time, avoiding tribalism and assimilation.


Phil ~ How can traditional churches and leaders benefit from the concerns and criticisms of emerging leaders?

Jim ~ I think that the emerging church has done a terrific job at diagnosing what ails the church. In Deep Church I lay out seven protests that the emerging church has against the traditional church. Even if the traditional church disagrees with their solutions, I think it behooves them to listen carefully to the criticism because I contend that they are often spot on.

Phil ~ Forging a new path, what you label as the third way, requires tolerance of an ongoing tension between evangelical truth (the doctrinal essentials of our faith) and emerging styles of worship and preaching as well as structures for teaching and discipleship. Agree or disagree ?...

Jim ~ I guess if I understand you correctly I tend to agree. There is no doubt as this new generation learns to contextualize the gospel, which our best missionaries have done for hundreds of years, to a new and changing post Christian culture there is going to be tension with the traditional church who may not see any reason to change their style of music or instrumentation because it has worked perfectly fine for the past 400 years! I also think there are newer styles of teaching and discipleship that are going to fit the postmodern environment better. But at the same time, there is much from the inherited past of the Great Tradition, pioneered before the Enlightenment, that is helpful today in how we teach, preach and disciple. So it is not just about being new. Sometimes the best way to be current is to be ancient.


Phil ~ The Church must be relevant to the culture (time and place issues) but culture must be irrelevant to the Church's understanding of biblical truth. What ongoing questions must leaders ask to protect that difference?

Jim ~ I agree that the church must be relevant to the culture because we have a responsibility to speak to real people, with real problems, in real situations. This is what love entails. But does this mean, as you ask, “that culture must be irrelevant to the church’s understanding of biblical truth.” In one sense this is true. The Bible’s message is timeless and cross cultural. But on the other hand, it is impossible (and I don’t think God requires) to read the Scriptures apart from our embedded cultures. And in a real sense this will impact the way we see and understand the Word. Certain cultures will “see” things differently than others; same truth but seen at a different angle. So what questions need to be asked? I think the church always must be going back to the Scriptures and asking if there is any place that the clear teachings of Scripture have been compromised or watered down for any reason. Has the Bible lost its ability to be prophetic, dangerous, threatening to the culture around it? Or has it become like a chaplain, just there to sooth wounds but not challenge or make uncomfortable. But on the other hand, we need to be asking if we have worked hard enough to contextual the message in a way that people can hear and respond to. In the book, I suggest that the Great Tradition becomes a plumb line for steering between irrelevance and syncretism.

If I may quote myself:

“Tradition and history act as checks on our views of the Bible and the world. If we neglect this vital history of the church we are bound to repeat the mistakes of the past. Instead we need to learn from the mistakes, be recalibrated by the wisdom of the past, and work out what it means to be the church today in the light of the Bible, mission and tradition.”

Phil ~ How is collaboration towards impacting cities and communities part of the "Third Way"?

Jim ~ I have a whole chapter, called Deep Culture, that addresses this important topic. The Bible makes it clear that we are called into God’s family (to be blessed) in order to be sent out (to bless others). We are called, says Jeremiah 29, to seek the peace of the city. This means impacting cities and communities. To pursue shalom means to lead people to a place where they have peace with God, peace with others, peace with themselves and peace with God’s creation. Tim Keller calls this the reweaving of our cities. I like that.

Phil ~ How about a final word for that pastor who recognizes the need to change the culture in their congregation or ministry but is unsure of the first few steps?

Jim ~ Big question. Do it slowly! Begin by teaching through a book like Acts or Daniel. These are great books for casting a vision for mission, cultural change and seeking the peace of the city. I would then join up, as we have done, with a organization like Church Resource Ministry and their reFocus process which helps pastors and churches move from simply a posture and commitment to maintenance to a posture of mission. They help churches outgrow the inward church syndrome.


Phil ~ Jim, please write a prayer you'd invite Christian pastors and leaders to pray along with you for the future of Christ's Church . . .

Jim ~ Heavenly Father and Gracious Redeemer, In every age your people have been faced with challenges from within and without. Our age is no different. But the challenges we face seem to be so daunting. We are living in a new post Christian era, what seems like a new dark era.

Thank you for your faithfulness to your church for thousands of years. You have protected the church, strengthened her, and mobilized her for action in each new generation. I pray you do this for ours. Amaze us again by your Kingdom, the good news of Jesus Christ, what he has done for us and through us, and how you have brought us into a new realm where you are Lord. The Kingdom has come. Help us to live as new people, transformed by your Gospel, empowered to live out your Shalom in every area of life—with you, with ourselves, with others and with your wonderful creation. Strengthen, protect, and inspire those you have called to lead your church. Amen.