What Did Jesus Do?

and what can we do?

“And let us consider how we may spur one another on toward love and good deeds,”

Several years ago, people had bracelets and bumper stickers that said “WWJD”-what would Jesus do?  It might be better to ask, “What did Jesus do?”  We don’t have to wonder about that.  In His keynote address Jesus told us what He came to do:

“The Spirit of the Lord is on me, because he has anointed me to proclaim good news to the poor.

He has sent me to proclaim freedom for the prisoners and recovery of sight for the blind, to set the oppressed free, to proclaim the year of the Lord’s favor.” Luke 4:18-19NIV

James was anointed or set apart by God to do these 4 things:

The gospels tell us how Jesus did these things.

He preached good news to the poor.

He shared good news with a despised Samaritan woman that changed her life and her entire community.  He also started his most famous sermon, the Sermon on the Mount with, “blessed are you who are poor for yours is the kingdom of God.”  Luke 6:20NIV  He preached good news to the harassed and helpless-the lost. (Matthew 9:35)  Jesus loves the poor-in fact the first people to hear about Jesus coming were very poor-the shepherds.

He proclaimed freedom for the prisoners.

Jesus delivered several people that were possessed by demons.  In one town, Jesus freed 2 men from bondage to demons and in doing so, he freed their town from having to put up with them (Matthew 8).  He also freed a woman caught in adultery from a death sentence (John 8).  Even on the cross, he gave freedom to a dying criminal and said he would see him in paradise (Luke 23:43).  Jesus freed those trapped in many types of bondage.

He provided recovery of sight for the blind.

He healed people who were physically blind (Matthew 9, Mark 8, John 9).  One of them was challenged by enemies of Jesus and said in reply, “one thing I do know, I was blind, but now I see” (John 9:25NIV).  What a testimony!  Jesus also made one man blind, then restored his sight and gave him his marching orders-the Apostle Paul.

He released the oppressed.

In Mark 1, a leper came to Jesus and asked to be made clean.  Lepers were the most oppressed group in that day-totally excluded from society.  Jesus had compassion on him, touched him and healed him.  By the way, no one touched lepers.  In Luke 7, Jesus forgave and restored a sinful woman, who was oppressed by those around her.  Jesus told her “your faith has saved you, go in peace” Luke 7:50NIV.

As followers of Jesus what can we do as we follow Jesus and His example?  1 John 2:6NIV says, “Whoever claims to live in Him must walk as Jesus did.”  As children, many of us played “follow the leader”.  Let’s never stop following our leader.  Acts 10:38NIV says that Jesus went around doing good.  We can do that.

We can preach good news to the poor.

They’re all around us, even people with lots of money, can be poor in spirit (Matthew 5:3).  Look around you-your family, friends, neighbors, co-workers, fellow students.  Ask God to open your eyes to their poverty.  A few years ago I got to know an elderly man across the street.  In time we became friends and he learned I was a minister.  He asked to be born again and baptized.  Later he told me “this is the moment I’ve been waiting for my entire life.”  It’s good news.

We can proclaim freedom for prisoners.

One night, years ago, I got a call from a friend that I knew was an alcoholic.  He was in the hospital and he told me he had been an alcoholic for many years and couldn’t stop drinking.  He asked me if God could help and I said yes.  I immediately took him a Bible and led him to Christ.  God freed him that night and he never took another drink.  I know that it doesn’t always work like that, but God has the power to free people from addictions of all kinds.  We can lead people to freedom.

We can provide recovery of sight for the blind.

Blindness is both physical and spiritual.  In 2 Corinthians 4:4NIV it says that Satan blinds the eyes of unbelievers so they can’t see the light of the Gospel.  We can shine our light into their darkness and help the blind to see.  John Newton, a former slave ship captain, wrote a song called Amazing Grace that said “I once was blind, but now I see.”  Do you know people who are blind? 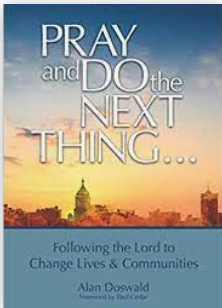 We can release the oppressed.

The oppressed are those who suffer the consequences of someone else’s sin.  Do you know people who are abused, neglected, bullied, left out, lonely, lost?  You can, help free them from their oppression by simply loving and befriending them.  Every child in school can befriend someone who is lonely and left out-it will change their life.  Even during COVID, people are only a phone call away.

One thing Jesus did that we can’t do is to atone for our sins.  Jesus was called, “the lamb of God who takes away the sin of the world” (John 1:29NIV).  The Bible says that Jesus would save His people from their sins, which is the very thing that can change our lives forever.  We can follow Jesus and serve others as Jesus did.  Jesus said that He did not come to be served but to serve and give His life as a ransom for others.  Let’s be followers of Jesus and serve others.

“…let your light shine before others, that they may see your good deeds and glorify your Father in heaven.”  Matthew 5:16NIV